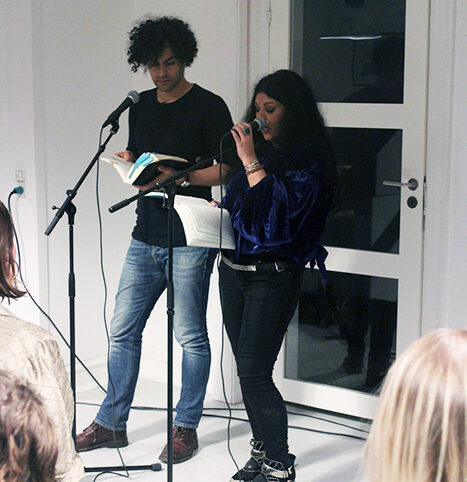 VIOLENCE IN POETRY / THE ART OF TRANSLATION

Violence in poetry / The art of translation was an event consisting of poetry readings and author talks. The event was created in collaboration with the Cross Nordic journal KRITIKER. The participating writers had all contributed to the 2018/2019 winter issue of KRITIKER with translated poetry and did readings of their translations. The poems deal with violence at different levels and at different times. The author talks focused on the possibilities and limitations of poetry in relation to violence as a theme, as well as the possibilities and limitations of the language in relation to translation.

Helena Boberg is a Swedish poet and translator. She debuted in 2011 with the poetry collection Repuls and has, among other things, translated Vingeslag by Shadi A. Bazeghi and Jeg, Unica by Kristine Refstrup.

Maja Lee Langvad is a writer and translator. She debuted in 2006 with the poem collection Find Holger Danske and most recently published Dage med galopperende hjertebanken in 2017.

Khashayar Naderehvandi is a Swedish author and translator. He debuted as a poet in 2011 and as a novelist in 2013. He is currently a doctoral student in kunstnerisk gestaltning at the Academy Valand, University of Gothenburg.

Athena Farrokhzad is a Swedish poet, translator and teacher at Biskops-Arnö’s School of Writing. She debuted in 2013 with the poetry collection Vitsvit and is currently writing dramas.

Matilda Södergran is a Finnish-Swedish poet and translator. She debuted in 2008 and graduated from the Översättarutbildningen at Lund University and Litterär översättning at the Valand Academy. Södergran has just published her collection of poems Överlevorna and her translation of the poet Siv Cedering.

Liv Nimand Duvå is a writer and translator. She debuted in 2017 with the novel, Vi er vel helte, and has translated works by Claudia Rankine and Sonja Åkesson in 2018.

Shadi Angelina Bazeghi is a poet and translator. She debuted in 2015 with the poetry collection Vingeslag. She has translated Forugh Farrokhzad and her translation of Audre Lorde’s poetry will be published in May 2019.

The event was supported by the The Danish Arts Foundation, the Nordic Cultural Fund & Nørrebro Lokaludvalg.