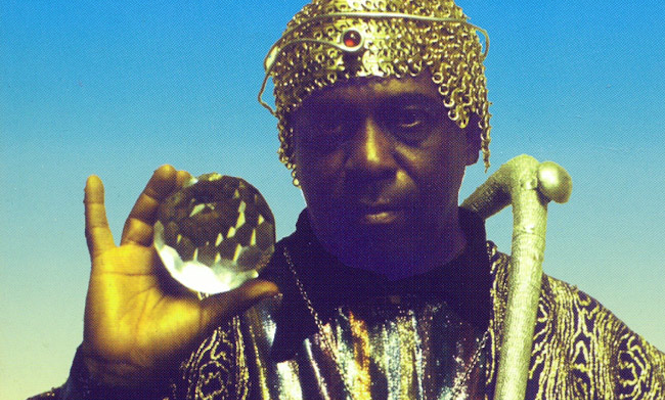 Kapwani Kiwanga’s film The Sun Ra Repatriation Project from 2009 was screened as a part of the exhibition Unravelings.

How do you fight rascisme, the feeling of being a stranger and not belonging within the society that you are supposed to be a part of. For legendary jazz musician Sun Ra (1934-1993) the solution was to take ownership of the alienation and to make it his own. He created a mystical tale about his origin in which he claimed that he had arrived on Earth from Saturn. In this way he created a counter-narrativ around a past that still influences formerly enslaved people today; a narrativ that also visualized a possible future in which racial stigmas had been eliminated.

The film Sun Ra Repatriation Project follows Kapwani Kiwanga’s attempt to return Sun Ra’s remains to their original home: Saturn. Kiwanga travels to the US and France to meet experts and scientists from NASA’s Jet Propulsion Laboratory and Observatoire de Paris in order for them to help her with formulating the astronomical aspects of the project. She asks the French police to create a composite portrait of Sun Ra from testimonies of those who knew him. The sketch is sent into deep space in 2009. Kapwani later arranges that a radiotelescope in California observes Saturn for any possible extraterrestrial radio transmission from Sun Ra.