MFA from The Royal Danish Academy of Fine Arts.

Peter Birkholm works in the field of noise, shamanism and the postapocalyptic, and dealing with these subjects as abstract phenomena in which the motif is inescapable.

Birkholm produces work as a solo artist as well as member of various art groups such as Lehman Brothers and Wulkan. 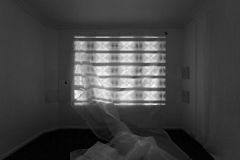 In an attempt to create a negative pop statement this video installation takes its point of departure in a rewritten 2pac quote: Do not take one’s adversity Do not learn from their misfortune Do not learn from their pain Do not believe in something Do not believe in yourself Do not turn adversity into ambition Do not blossom into wealth. (In its absence) the quote makes up the basis of a slave hypnosis that is formed as an attempt to deprive the audience of its will as audience.