Jessie Kleemann’s performances develop intuitively and respond to the space and audience around her. She often delves into subjects surrounding the darker sides of Greenland society in order to visualize the ambivalence of the relationship that the people of Greenland can have towards their cultural inheritance.

Jessie Kleemann also works with video, painting as well as poetry. In her poems she often writes both Greenlandic and Danish as she explores her heritage in a fractured linguistic material. Her poem “In your face” was published in last issue of the journal KRITIK. 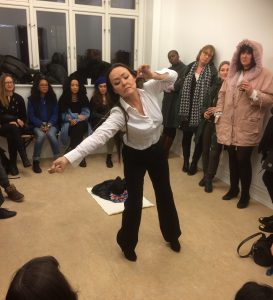 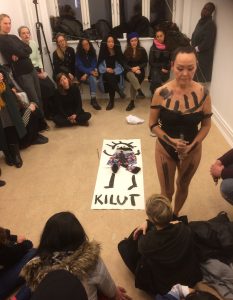 The video is produced by liveart.dk and is a part of a new project, where they experiment with the documentation of performance. This video is filmed using 360 degree camera.

The performance I tråd med tiden focuses on the use and meaning of thread in Greenlandic culture. By exploring thread as a material for the sewing of sealskin and anoraks as well as its conceptual meaning of linking a complex, shared, cultural inheritance, Jessie Kleemann invites the audience into an intimate experience, where she investigates the perception of the Inuit woman.