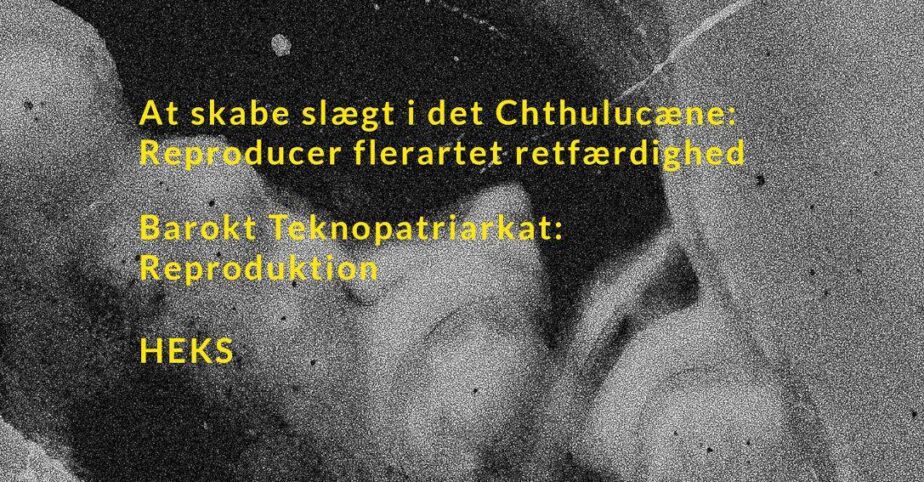 The curatorial platform and publishing house – Laboratory for Aesthetics and Ecology – is launching a new publication at meter as part of the exhibition Shaking the habitual: When does the future begin. The publication contains the texts: ”Making Kin in the Chthulucene: Reproducing Multispiecies Justice” by Donna Haraway; ”Baroque Technopatriarchy: Reproduction” by Paul B. Preciado; and the poem ”HEKS” by Ursula Andkjær Olsen.The Laboratory for Aesthetics and Ecology is represented by Dea Antonsen & Ida Bencke at this event.

In this context we invite you to join us in a difficult, vulnerable, personal and political conversation about reproduction, kinship and necropatriarchy in a climate-critical time with visual artist and activist Yong Sun Gullach, visual artist Marie Kølbæk Iversen, queer thinker Nanna McKay Mansa and author Ursula Andkjær Olsen. We will touch on some of the complex nodes and issues that the three texts deal with: normative, (post)-colonialist power structures and issues concerning reproduction, gender, body, births, family forms, kinship and adoption. On rethinking community forms, care practices and healings. As well as utopia as an (im)possible space.

We very much hope that you will join in and challenge and expand the conversation with us.

Present at the event and joining in the conversation are:

Yong Sun Gullach, who is a Korean-Danish visual artist and activist, as well as the front person for the Adoption Policy Forum. She works primarily with themes such as Southeast Asian diaspora, identity, power structures and language in performative installations, writing and sound.

Marie Kølbæk Iversen, who is a visual artist and PhD student at resp. AURA (Aarhus University Research on the Anthropocene) and Oslo Art Academy with an interdisciplinary project that connects anthropological method within obstetrics and artistic research on maternity and birth traumas, and the transformative potentials of fear.

Nanna McKay Mansa, who is a non-binary, queer trans person added a sprinkle of cripplepunk as well as a bit of other flavors from the underground. They have previously made a number of queerlesque performances and wants to fight against e.g. transphobia, sexism, homophobia, ableism and normative power structures. In addition, they want everyone to be able to do what they want with their body – and they are strongly committed to overthrowing the patriarchy in their lifetime.

Ursula Andkjær Olsen graduated from the National School for Creative Writing in 1999 and after teaching there since 2016 took over the position as principal in 2019. Her written work revolves around ‘queer’ morphologies of the mother body, as as exemplified in the work ”Third Millenium Heart” (2012) – that won the Montana Literature Prize.

It is published by Laboratory for Aesthetics and Ecology. The laboratory is a curatorial platform for complex planetary creations, multifaceted communities and narratives. They work with exhibitions, publications, assemblies and conversations in an interdisciplinary field of connections between disciplines, species, voices.

The text ”Making Kin in the Chthulucene: Reproducing Multispiecies Justice” by biologist and philosopher Donna Haraways deals with overpopulation and climate issues, as well as questions of life and death. She unfolds her radical statement ”Make kin, not babies”, with which she demands ethical care practices and lineage creation across species, classes, regions, nations, etc. The text has been translated into Danish by Pil Ingerslev.

The text ”Baroque Technopatriarchy: Reproduction” by transgender activist and philosopher Paul B. Preciados deals with new biotechnologies, gender concepts, intersexuality and transsexuality, as well as the medical and legal institutions and power structures that determine bodies in a system of production and reproduction. The text has been translated by Ida Bencke.

The poem ”HEKS” is written by poet and head of the National School for Creative Writing Ursula Andkjær Olsen and published with her permission.

The anthology is financed by I meter I

The book launch is funded by Københavns Kommune.