Hvidme Archive is a multidisciplinary collection of texts and works, unfolding critical perspectives through a conceptualization of the old Danish noun hvidme. They want to deconstruct and problematize whiteness. In this sense, the archive is partly a linguistic manoeuvre to represent a vocabulary for discussion, and partly a room where critical perspectives on whiteness can be shared. Hvidme Archive is a polyphonic and tentative action that seeks to expose the white colour’s violence, the institutional power at play and the selective colonial memory.

Hvidme Archive is a collaboration between artists Annarosa Krøyer Holm and Miriam Haile. 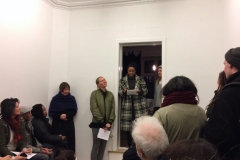 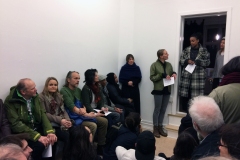 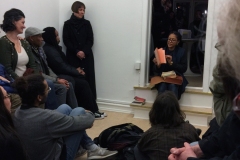 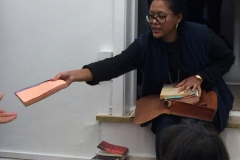 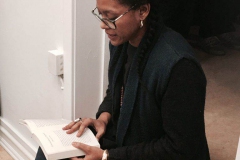 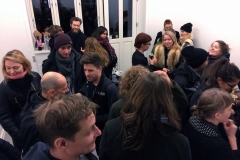 Hvidme Archive is installed in a space of its own during the exhibition period.

As part of the opening event for the group exhibition Unravelings Lesley-Ann Brown will be reading from a series of works, started upon when she first moved to Copenhagen 18 years ago from Brooklyn. The reading will be a mix of poetry and prose that includes poems from her two volumes of poetry, entitled: The Organist’s Daughter and Black Girls On Mars, named after her now-retired blog of the same name. She approaches different subjects in her poetry, such as: home, womanhood, migration and identity.

Ethelene Whitmire talks about her project Searching for Utopia. The African American/Danish Archives, an interdisciplinary and historical collection of primary and secondary sources in English and Danish documenting the lives of African Americans in Denmark during the 20th century. Whitmire’s book-in-progress explores the questions:

Whitmire´s current archival research project explores the experiences of African Americans who studied, visited, lived and performed in Denmark during the 20th century. Educators, artist, social workers, writers, singers, jazz musicians among many others, were drawn to the Scandinavian countries and Whitmire will visually present their stories and her own encounters of the process in writing her upcoming book.

Yong Sun Gullach’s performance The Star Child Project is part of a series of art expressions, circulating on the topic Transnational Adoption as modern colonization.

The Star Child Project aims to investigate the ritual burden that the colonialized body experience, by attaching objects that hinders a balance and movement. The experiment investigates the material, the audience and the body that leave traces – a bodily mark, a scar, a scarification. The tactility of the materials both shapes and carry a clear reference to the colonization of Southeast and East Asia.