The works Anne Dyhr presents at Kunstnernes Efterårsudstilling fascinated us because they allow access to an intimate space, both of which appear fragile and excessive. A room where the portraited body does not appear to conform to the surroundings. This does not necessarily entail conflict but seems oddly liberating, as if it is almost a subtle bodily protest we are witnessing.

The two installations can be seen as a form of photography in an expanded field, where the motifs of the image – the position of the body, clothing, the interior and the atmosphere repeats, abstracts and is further explored in the sculptural elements.

At first glance, there is careless arrogance about the various ways elements are composed and placed. This is not meant as negative on the contrary it makes the works seem uncompromising and strong in their expression and presence in the space the inhabit.

As you address the works and allow them time, it gradually becomes clear the precision in which each element is placed together. It gives one the feeling that the narrative you are presented are to be read exactly by those elements in exactly that composition. Hence a balance occurs in all the chaos. 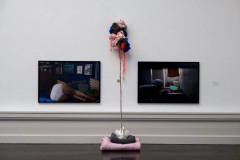