Nanna Debois Buhl investigates the layers of stories and histories inscribed in landscapes and urban spaces. Her works are “close readings” of how artifacts and ideologies are interrelated, how they travel through, and change over time. Her projects materialize through a combination of installations, film, text, photography, sound, and books. In a recent body of works she examines traces of the Danish colonial past in the intersection of Afro-Caribbean, American, and Danish histories – through feral donkeys, wallpaper patterns, and abandoned colonial architecture.

Nanna Debois Buhl will be showing the two artworks Maroon Mountain and There Is This House. 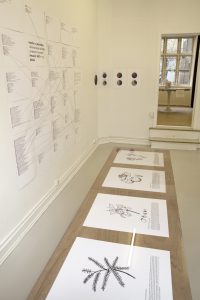 Maroon Mountain from 2009 is a series of four prints, which takes its title from the mountain of the same name situated on the west coast of St. Croix, US. Fredericia. The name of the mountain refers to the maroons (escaping enslaved people), who hid there when fleeing from the plantations. The maroons used the plants mentioned in this series of drawings in their acts of resistance. To each drawing is a text, where Nanna Debois Buhl connects language borrowed from botanical encyclopedias with narratives of violence and resistance. 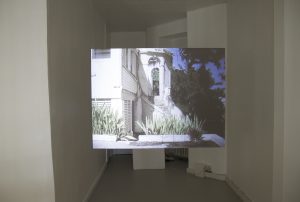 There is This House by Nanna Debois Buhl, 2008. Photo: Suada Demirovic.

There Is This House from 2008 is a silent film that combines footage from an abandoned house (a typical example of the 19th-century colonial architecture on St. Croix) with a story about the Christian Moravian Brotherhood who came from Germany to the Virgin Islands in the 18th century to baptize the enslaved people on the island. The brotherhood had a remarkable procedure for decision-making: all decisions were made by the drawing of lots