MFA from The Royal Danish Academy of Fine Arts and Goldsmiths, University of London, United Kingdom.

Marie Thams’ work is driven by questions around the valuation of human activities in the current (late)capitalist Western society; the working culture’s dictation of identity and artistic value; the relation between biological body and social/political status. Her work often includes a combination of video, sound, text and sculptural and performative elements, resulting in larger installations. The subjective voice, tone and point of departure are crucial in her critical reactions to the current social, political and economic situation. Most recently she has had a special focus on spoken, poetic text – both as independent work, as part of larger installations and as publications.

For the exhibition Marie Thams presented the performance lecture O(h)n no mr. B. on December 9. 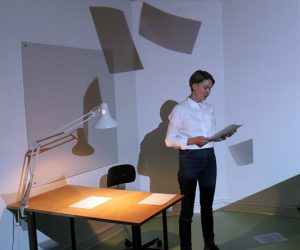 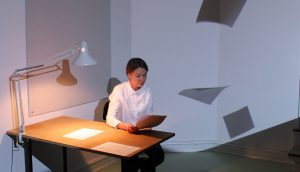 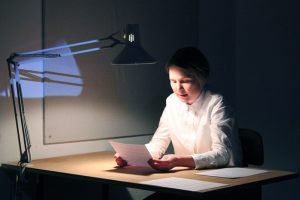 In the performance lecture O(h)n no mr. B. Marie Thams again addresses Bartleby, the protagonist of Herman Melville’s short story Bartleby the Scrivener (1853).

With O(h)n no mr. B. Thams aims to tackle the possible no, which Bartleby testifies to. With her point of departure in their initial meeting in 2010 she looks at the development of her investigations and interest in Bartleby’s “preferring not to” until today, zooming in on the possibility to act in negation. With renewed focus on her original question to Bartleby: “What did you do before stopping doing so?”, the mood is marked by continued insistence on ungraspable production and human “unproductive” will (seen in the light of the late-capitalist labour market logics), now joint with a call for action to mr. B.