Herman Melville was an American writer mostly known for his novel Moby-Dick (1851), although it was considered a failure during his lifetime. In the period 1853-1856 Melville published short stories for magazines. Amongst them was Bartleby the Scrivener: A Story of Wall Street published anonymously for Putnam’s Monthly Magazine in two parts in 1853. The short story would later be published (1856) in the book The Piazza Tales with minor alterations.

Herman Melville’s Bartleby the Scrivener: A Story of Wall Street is republished for the exhibition I would prefer not to by KLD Repro. 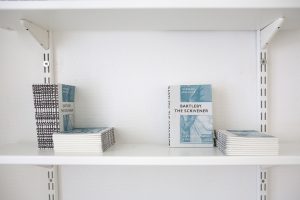 Bartleby the Scrivener: A Story of Wall Street by Herman Melville. Republished in 2017 by KLD Repro. Photo: Camilla Reyman.