In her practice Julie Edel Hardenberg works with identity, culture and language from a post-colonial perspective, where she focuses on themes about mental colonization, cultural assimilation and socialization structures. Greenland, like other countries, is no longer a unique community and by working with national symbols, language and ethnicity and by examining the stereotypical concept of the original, Julie Edel Hardenberg tries to problematise and put these conditions in perspective. 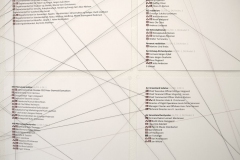 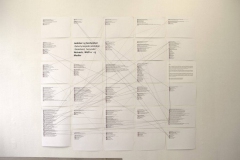 Julie Edel Hardenberg will be showing her work Dis/Connection, where she through mapping explores the connection between language, gender and power structures in Greenland.

Language gives us access to knowledge and to convey knowledge. Language connects us to communities. When we speak a language, we think in language. When we think and speak in language, we think in culture. Therefore, language represents both culture and knowledge. Because, in language, both philosophy and history is to be found. When we think language, we often think ethnicity. But ethnicity doesn’t always represent a linguistic affiliation (sense of belonging). Ethnicity doesn’t always represent a cultural understanding. That is why we make (social) connections through language more than through ethnicity all over the world.

The Greenlandic language, kalaallisut, is the official language in Greenland. It’s a democratic problem, when the cultural and language majority, which is Greenlandic, is not equally represented among business leaders and management boards in Greenland. It must have a negative impact on society when decision-makers neither language-wise nor culturally understand the reality that the majority lives in.

In comparison to other Nordic countries the people of Greenland possess challenges that are inextricably linked to their former status as a colony, from which elements still exist in the societal structure. A paradigm shift is necessary if society is to be steered in a direction where it becomes possible for the population to take ownership of the development. As things are today, a structure of linguistically and culturally discriminatory society are being reproduced, which is conformed to a privileged minority. It does not improve the conditions for societal development – it rather contributes to the continuance of the reproduction of existing problems.