Javier Tapia’s works can be described as a chain of events in continuous expansion. His work often comments on problems associated with geopolitics and the function of art in the local and global culture. Here he points towards the influence of the colonial era, where notions of identity and background play a major role, as it does for the overall work. 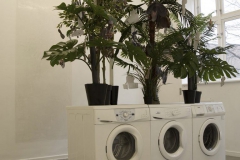 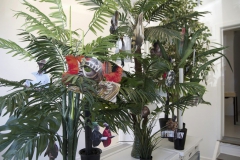 Floating Worlds looks at the history of the people on the Caribbean Islands. From the arrival of Christopher Columbus this history is branded by the development of slavery and colonialism. This happened as an economic strategy to provide the colonial powers the centres of production and strategic points, where they could initiate further expansions.

By the time the Caribbean Islands got fully colonized by European countries mostly England, Spain, Portugal, Holland and Denmark, the original local population of aborigines got reduced to almost non-existent, this was due to the increase of wars and new kind sicknesses brought by the “new owners”.

The new populations of the Islands then, brought by Europeans as slaves, were mainly blacks from the West African coast. In the years of the slave trade, millions of black people were shipped under very tough conditions, in order to become the rising work force of the colonized territories in the Americas and the Caribbean.

Many of the black people that worked incessantly for years, without rights and under subhuman conditions in these territories of expansion, were taken from different areas of Africa, sometimes without any relatives or members of their own tribes. As years past, many blacks became aware of their role under slavery. Many revealed, as it is the example of the Haitian revolution (1791-1804) and the Danish West Indians rebellion (1733), while others escaped into the jungles and forests, creating their own societies, cultivating and rescuing their own culture for years to come.

Floating Worlds aims to be a comment on this history, where many of the things that are considered as facts fall under a great deal of uncertainty. This is due to the fact that the official history has omitted stories and perspectives from some of the main protagonists, the blacks. This project therefore wants to highlight through art, the actual relevance of the many thousands of people that lived, worked and has created a life and a culture in this area of the world after the period of slavery.

The history of representation of the Caribbean is therefore an open door to many subthemes and critical points of view, all of which can be included and discussed inside the very important process of decolonization today.